Scheduled for 6:45 pm, the event will allow Madam Opoku-Agyemang make her maiden policy statement since her announcement as running mate.

The program will also be broadcast live on radio and television platforms as well as on social media.

A statement from the office of the Former President indicated that the outdooring will be held in accordance with COVID-19 protocols.

“About 100 people drawn from a wide array of groupings are expected to attend the ceremony which will broadcast live on radio and television networks across the country.” 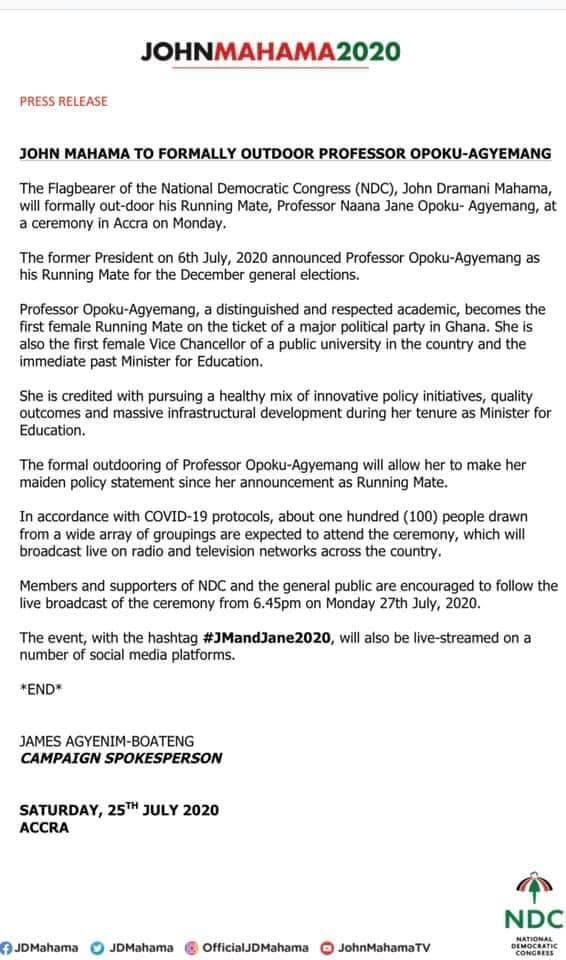 He said, Professor Opoku-Agyemang had the credentials worthy of her selection and listed several achievements including her appointment as the first female Vice-Chancellor of a Ghanaian university and her significant contribution to the educational sector during her tenure as Minister.

Since her announcement, several groups and individuals have congratulated the former Education Minister, on her selection as Vice-Presidential candidate of the National Democratic Congress (NDC).

Others have said is a positive step for Ghana’s democracy.

Former President, Jerry John Rawlings has urged Professor Opoku Agyemang not to deviate from her principles of integrity.

Prof. Naana Jane Opoku-Agyemang has expressed appreciation for the support that greeted the announcement of her new role.

She is grateful for the support and pointed out that she will justify the confidence reposed in her.

Prof. Opoku-Agyemang who said people, especially women, are looking up to the NDC for answers to issues that affect them, called on the NDC to close its ranks and work hard for victory in the upcoming elections.